All three cyclones are lined with the highest quality abrasive resistive rubber which is designed to work in the toughest applications. The rubber has a shore hardness of 40IRDH and an abrasion resistance of 108. The rubber is hot vulcanised to the steel body at pressure to ensure a top quality seamless liner.

Further details on all three cyclones can be found in our Cyclones brochure.

A hydro-cyclone is a device used for the classification of sub sieve materials typically below 200 microns. The material (in slurry form) is fed into the feed chamber at pressure, using a centrifugal pump. The centrifugal pump is paired with a cyclone to ensure optimal feed rate for the cyclone to perform efficiently. 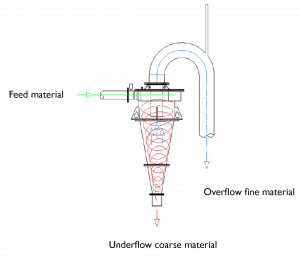 PRESSURE WITHIN THE CYCLONE

Due to the conical shape of the cyclone, as the material makes its way down the cone, the pressure increase creating a vortex within the centre of the cyclone capable of lifting particles caught within it, carrying them up through the overflow of the cyclone

HOW THE SEPARATION OCCURS

Gromatex cyclones can be paired with any brand of centrifugal slurry pump, however care must be taken to ensure that the pump feed rates and operation pressures are optimal with the cyclones requirements to ensure optimal operating conditions and maximum efficiency. Gromatex recommend using Slurry Pro’s centrifugal pump range. We can specify and supply pumps according to your specific requirements. As a rule the tables below indicate typical pairings.

When dealing with cyclo-pacs, i.e. more than two cyclones arranged in a cluster it is advisable to contact Gromatex and our engineers will take on board each specific application and can advise on the set up required.

Certain parts within the assembly of the cyclone can be altered to change or tune the properties of the cyclone. Cut points can be managed by changing the inlet diameter, the vortex finder and most easily the spigot assembly. Gromatex carry a fully range of spigots and vortex finder which are available upon request.